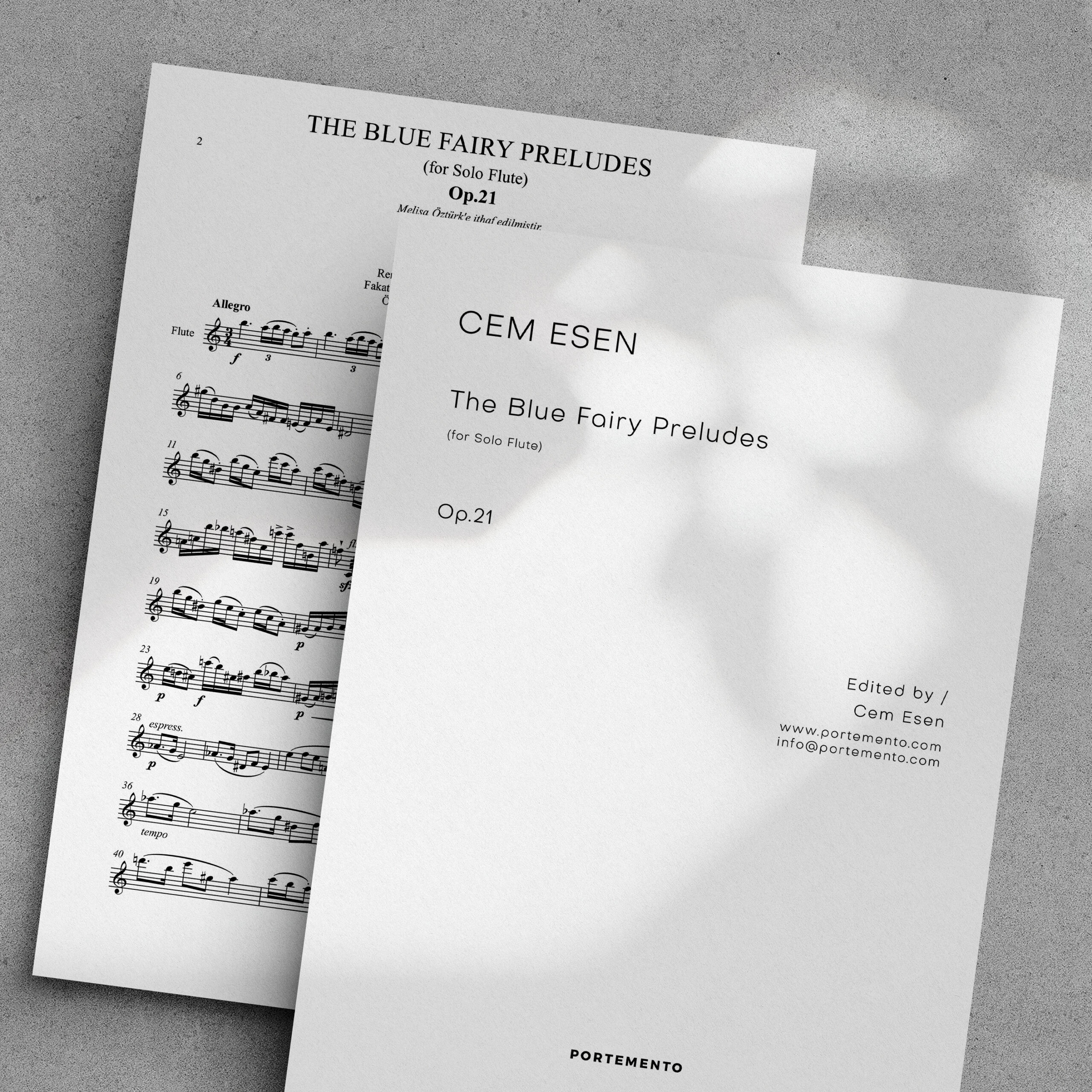 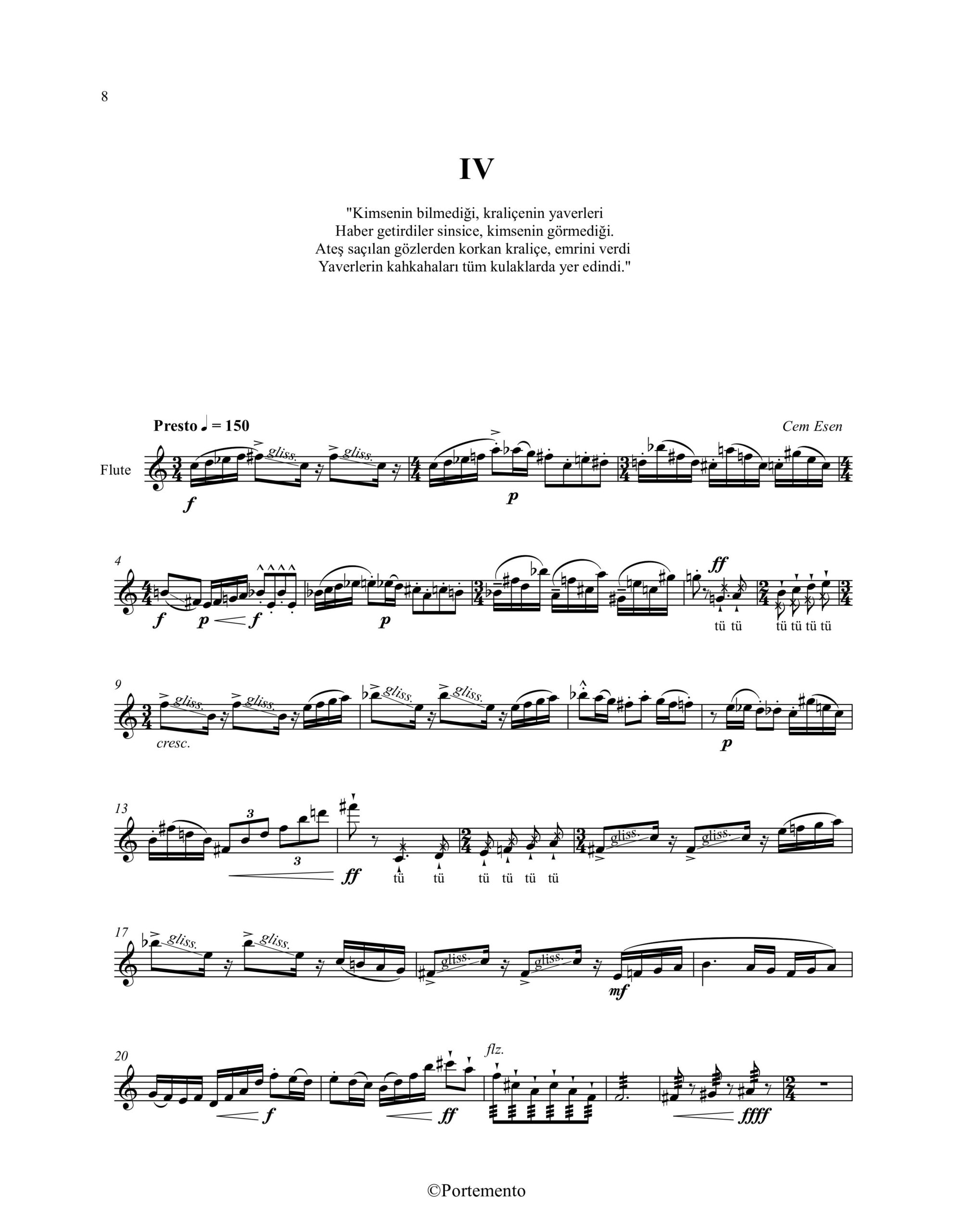 These series composed by Cem Esen in 2020 and performed by flutist Cem Önertürk in FLUTOPIA Album – 2021. There are 5 different movements and each movement reflects a story or a character.

These series composed by Cem Esen in 2020 and performed by flutist Cem Önertürk in FLUTOPIA Album – 2021. There are 5 different movements and each movement reflects a story or a character.

“In the darkness of the night, a blue fairy suddenly appeared before a young fisherman, as he was fishing. Blue fairies come down on to earth at the night to inspire people. Not everybody can see them but they show themselves to creative ones. It was the first time, when a human could see a blue fairy with naked eyes. The young fisherman’s hopeless dreams got lost in the brightness of blue light. They fell in love with each other, he found his love in the silence of the night, then he put it into his heart. But, suddenly, toward the morning the fairy just disappeared. He didn’t know, the fairy could be seen only in the moonlight. It was never enough to thank the moon, he wished that night would always be. That’s why each time he wanted to see her, he went to the same place and whipped his rod to the very same point and waited for the fairy. At nights the fairy appeared again. But there was a problem. It was a forbidden love; nobody could be aware of it. For months, they met without being seen by anyone but they couldn’t escape juggler daemons. The daemons, whose saw these lovers told the fairy queen about this forbidden love. These daemons come down to the earth to spread fear. Unlike fairies, they appear in nightmares. The fairy queen, after being about this forbidden love, found this relationship between a human and a fairy from the sublime fairy race miserable. She forbade their meetings, found that blue fairy and punished her. As her punishment, she was transformed into a human being and all her light was taken. The sky longed her gorgeous blue light. After being sent to the earth, this girl was no longer a fairy but she didn’t give up and looked for her fisherman. She finally found him but he didn’t believe her. The fisherman didn’t even look at her face. Was it only the blue light he wanted? The mortal girl wanted to come together with her fisherman but the he, each night, waited for his blue fairy but never knew the truth…”

The composer says: “Blue Fairy Preludes is a series that I began to compose upon the order of my dear friend Melisa Öztürk. That helped me with forming a story that I had already been thinking about. Blue Fairy story is also known as “Moonlight”. I have actually already composed this story as a symphonic ballet suite. That suite consists of 5 movements, as it does in this series. All the movements conform with each other. I only represent the story from different perspectives in each movement. While describing blue fairies in the first movement of my symphony ballet suite, in first movement of this series I describe the blue fairy, who is our main character. In the second movements of both the suite and this series, the fairy queen’s orders, the hierarchy that she built and the flutter around of fairies are described. The third movement of the suite, titled “Moonlight”, is described the first meeting of the fisherman and the blue fairy and emphasises on the impossibilities of the love of those two. In the third movement of the series the fisherman’s pure feelings are described. The fourth movements of both the suite and the series, juggler daemons are represented. The fifth movement of the suite is a funeral march, which actually represents our mortal lives. But the fifth movement of the series describes the loneliness and emotions of the mortal girl, whose light is no more, unlike as she was a fairy. Thematic connections can be found in both works.”

There are no reviews yet.

Write a Review
Be the first to review “Cem Esen – “The Blue Fairy Preludes” Op.21 (For Solo Flute)” Cancel reply

Portemento is a music edition company founded by Cem Esen in 2020. Its main mission is to easily convey the works of living composers to artists.

The rights of the sheet music published on this site belong to Portemento.